Brian Bromberg certainly has evolved into a very respected voice in music industry. From smashing through the barriers of how the bass is supposed to be played, cutting edge bass design, to being recognized as a world-class producer, songwriter, and session musician. He keeps pushing the envelope to become the best that he can be and to keep pushing the boundaries. As Brian himself says, "There are no rules, just dreams".

Born in Tucson Arizona, Brian grew up in a family of musicians and artists. His father and brother played the drums. With all that music around the house, and drums all over the place, it was natural for Brian to start playing the drums as well. Brian was two and a half years old, beating up the furniture and banging on anything that didn't move.

After some years of playing and practicing, Brian began his professional career as a drummer at the age of thirteen. In elementary and Jr.high School, Brian also played the cello. That was one instrument that Brian did not feel very comfortable playing. One day in orchestra class at jr. high, the orchestra director came over to Brian and said, hey Brian, you see that big bass over there in the corner? You know that nobody is playing it. Don't you want to play that big cool bass over there? You see, the orchestra director had a plan. He thought that having one bad bass player was better then not having one at all. That was his way of getting Brian to stop trying to saw his cello in half! That day was a blessing in disguise. Brian didn't realize that he had the gift for melody as well as rhythm. With his drumming background, and all this new melody available to him from the bass, Brian knew that this was going to be his path.

Brian's first big break came in 1979 when Marc Johnson, the wonderful bassist with the great jazz pianist Bill Evans, heard Brian play while on the road in Tucson. Several months later while on tour, Marc ran into legendary jazz saxophonist Stan Getz. Stan was looking for a new bass player and asked Marc if he knew any new young players. Marc told Stan about Brian. Brian auditioned for Stan and joined the Stan Getz quintet in December of 1979. Brian had just turned 19 and spent nearly a year touring the world with Stan and his band.

Since then, Brian has toured, performed and or recorded with some of the greatest artists of our time and he has also played on many movie soundtracks.

Brian's solo career began with the release of his first album A New Day in 1986 that caught smooth jazz radio's attention, followed by his next release Basses Loaded  in 1988 started to propel his visibility more and Brian was beginning to be recognized as a composer as well as a bassist.

Brian's very much anticipated third release, Magic Rain was the #1 most added record to radio in the country within the first week of release. Many people feel that this recording is when Brian started really coming into his own skin as an artist.

Bromberg's fourth release BASSically Speaking, actually a reissue of Brian's first recording with some new tracks and additions, went top 5 on the radio charts and #7 on the Billboard sale's charts.

With solid following among smooth jazz fans, he put out a straight ahead jazz album, It's About Time, The Acoustic Project. This album reached number four on the mainstream jazz charts in 1991. Bromberg recorded in a trio with Freddie Hubbard and Ernie Watts. After It's About Time, The Acoustic Project he returned to smooth jazz. The label that released Brian Bromberg (1993) went out of business the week of its release.

In February 1998, he released You Know That Feeling, which as recorded with Rick Braun, Joe Sample, Jeff Lorber and Everette Harp. The album became Bromberg's most successful, later to be topped by Wood, and his first smooth jazz number one record of his career. You Know That Feeling had three singles in a row that each went to number three on the charts. It spent seventeen consecutive months on the charts, eight months in the top ten, nearly six months in the top five. Bromberg's album was the fifth most-played album from the top 100 albums of the year in smooth jazz. Songs from You Know That Feeling are still regularly played in smooth jazz stations across America. Additionally, in 2003, Bromberg made a record simply titled Jaco in which he performs many of Jaco Pastorius's notable songs.

After You Know That Feeling, Bromberg's albums deviated from his smooth jazz roots. Wood (2002), produced by a Japanese label, was recorded with pianist Randy Waldman and brother David Bromberg on drums. Wood contains solo jazz versions of "Carry on My Wayward Son" by Kansas and "Let 'Em In" by Paul McCartney. In addition to the solo pieces, Wood and Wood 2 (with drummer Vinnie Colaiuta replacing David Bromberg) contain interpretations of music by Wayne Shorter and Woody Herman. On an even sharper turn from his smooth jazz past, Bromberg released Metal (2005) with drummer Joel Taylor.

Like all of his work, Bromberg’s latest features a stellar cast that includes trumpeter Arturo Sandoval, saxophonists Bob Sheppard, Kirk Whalum and Doug Webb, pianists Randy Waldman, Mitch Forman and Otmaro Ruiz, and percussionist Alex Acuña. The project also finds ‘the man that refuses to sit still’ mixing styles from New Orleans funk and a legit jazz cover of Michael Jackson’s “Don’t Stop `Til You Get Enough” with a sizzling relentless swing throughout, to "Havana Nights" a Cuban salsa style hot latin tune. These are the aspects that make this project resonate deeper than anything Bromberg’s done prior boils down to a series of life changing events, career firsts and the magic of today’s technology meeting mediums of old.

Full Circle opens and closes with the tunes “Jazz Me Blues” and “Washington & Lee Swing” that were originally recorded by the senior Bromberg with a band of friends onto a one off acetate. Spiritually moved by a desire to play with his late father – something he never got to do when he was alive due to a stroke he suffered just when Bromberg became proficient on bass – he copied the platter with a USB turntable, had the file cleaned up at Oasis Mastering then overdubbed himself in his home studio playing bass in his dad’s old quintet. “A few really amazing things happened to me when I was recording those tracks with my father; those tracks originally were recorded before I was born, so it was such a trip playing with my Dad before I was even on this planet! When I was playing with him I realized at that moment where I got my time feel and swing from, it was effortless to play with him, mind blowing actually. I guess the experience that inspired the whole concept of this CD was feeling his time feel and swing inspired me to start playing drums again, because it felt so good.” That sentimental journey inspired Full Circle. Bromberg seamlessly laid down the rhythm tracks for bass, drums and “guitar” (the latter facilitated by playing melodies and solos on the higher pitched piccolo bass) on every song. As a bassist, Bromberg playing the piccolo bass with his fingers affords him a unique sound (much like Stanley Jordan on guitar) from the majority of guitarists that play using picks.

Bromberg's next release Thicker Than Water is about as polar opposite as "Full Circle" as you can get. Released in July 2018, Thicker Than Water went to #1 in the country on the Billboard Smooth Jazz charts and #1 on the Smooth Jazz Network charts! Brian's new CD is a high energy, funky, in your face project unlike anything Bromberg has ever done in his career. This is a CD that Bromberg has been wanting to make for years. This CD is all original music totally ensconced in memorable melodies, infectious grooves, and deep pocket. Live horn sections rounding out a truly fun and positive energy listening experience. Thicker Than Water features artists like: Najee, George Duke, Randy Brecker, Everette Harp, Paul Jackson Jr. Brian Simpson, Marion Meadows. Brandon Fields, and Gary Meek.

In addition to Brian’s success as a solo artist, he has developed quite a reputation as a producer. To see some of the projects that Brian has produced, Please go to the B² Productions area of the site as there are many CD’s and sound bites from some of those projects.

All in all, Brian has produced more than a dozen top #10 and top #5 hits as well as five #1 songs for himself and other recording artists! 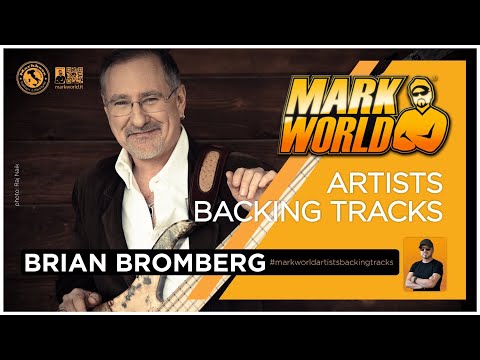