He grew up in a family where music and all kind of arts were the priority. He started by playing the drums by self teaching himself at the age of 2, and finally fell in love with the bass at the age of 14 after he heard Weather Report and especially Jaco Pastorius. He also taught himself, watching, transcribing and listening to every notes Jaco played, and trying to get « that » sound and trying to learn how to play.
Later on, bass became his main instrument and he got a little bit away from Jaco. Linley Marthe, Alphonso Johnson, Marcus Miller, Sting, Paul McCartney, Neil Jason, Stanley Clarke, and Paul Jackson also influenced his style.
At this time, music became the most important thing in his life more than anything else and he decided to make it his profession. The music of Joe Zawinul, Herbie Hancock, Brecker Brothers, Wayne Shorter, Mike Stern, Tribal Tech, Al Jarreau, Chick Corea, The Police, Michael Jackson and The Beatles has deeply influenced him too.
In 2011, he moved to Paris to enter the famous Conservatoire National Supérieur de Musique de Paris, and he attended classes of Riccardo Del Fra (Chet Baker), Glenn Ferris (F. Zappa)…
He left after one year to go on his own and started playing with some of the famous names of the Parisian Jazz Scene and started to go on tour with different artists as Céline Bonacina, Nguyên Lê, Francis Lassus…
He is, since 2013, the main bass player in Nguyên Lê’s bands “Songs Of Freedom”, “Celebrating Jimi Hendrix” and the most recent project is “Celebrating the Dark Side of the Moon”.
In 2016, he met Scott Henderson and went on tour with him with Archibald Ligonnière on drums. He is now part of his new trio and a new album is gonna be released in 2018. They are touring several time a year between Europe, Asia and South America.
Through the years, Romain has played or recorded with Nguyên Lê, Mario Canonge, Rocco Zifarelli, Francis Lassus, Paco Séry, Grégory Privat, Karim Ziad, Chander Sardjoe, Gergo Borlai, Nicolas Viccaro, Alain Debiossat, Linley Marthe, Céline Bonacina, Stéphane Guillaume, Stéphane Galland, Jerry Léonide, Yoann Schmidt, Archibald Ligonnière, Benjamin Petit, Damien Schmitt, Federico Malaman, Hadrien Féraud, Nicolas Folmer, Jon Grancamp, Tom Ibarra, Tung Duong, Michel Fugain, Thierry Maillard, Dean Brown, Marvin "Smitty" Smith, Nina Attal, Norbert Krief, Scott Henderson, and others.

"I immediately fell in love with the sound of these amps from the second I played them."—says Romai—"They are giving my bass its natural tone, and they fit in every situations, from club gigs to bigger venues. And one of the best thing about Markbass is their very lightweight gear. You can travel with your own sound everywhere in the world, and that’s what I do. I always carry my own bass head on tour so I can have my sound!"

The great Scott Henderson is about to embark on European Tour with his trio feat. Markbass artist Romain Labaye on bass and Archibald Ligonnière on drums.

Markbass artist Romain Labaye is about to embark on a summer tour with the great Scott Henderson, feat. Archibald Ligonnière on drums.

Markbass artist Romain Labaye is about to start the European Tour with the Scott Henderson Trio, feat. Archibald Ligonnière on drums.

Markbass artist Romain Labaye is about to embark on Asia, India and Europe tour with the great Scott Henderson, feat. Archibald Ligonnière on drums. 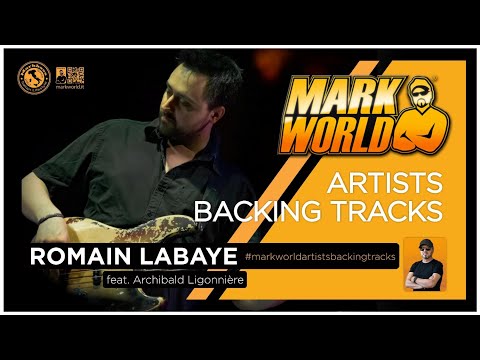