Cristian Capasso is a bass and doublebass player, born in Caserta on 1990.

Coming from a musical family, since his chidhood he was always surrounded by music but is thanks to his father that he discovered his first instrument: the electric bass which he started playing at the age of 11.
Few years later he started the formal studies at the Conservatory of Benevento under the guidance of Rino Zurzolo who introduced to Cristian the charming world of the doublebass. Since 2007 he works as a session man performing live concerts as well as studio sessions.

In 2013 he moves to NYC for a period that will change his attitude towards music and music business. He soon got engagement to play in the Big Apple in venues like LeFrak Concert Hall, The Italian American Museum, ICN Radio, The Metropolitan Room and Television appearances with the Italian jazz singer Simona De Rosa with the project “Inside Quartet”.
He moved back to Italy and the experience and the popularity gained in the States allowed him to work all over the country with the theatre project “Stasera ci divertiamo” of Gino Rivieccio playing in the band of Antonello Cascone.
In 2015 he joins the project “Gennarelli’s Band Project ”, touring in Seoul and Hong Kong. He collaborates with Peppe Vessicchio ed Luca Pitteri, two of the most famous directors on the Italian scene. He plays at some of the most famous Italian jazz festivals such as “Capri in jazz” (Inside Quartet special guest Giovanni Imparato) , “Ravello Festival” (Soul Six),”Alatri Jazz” (Inside Quartet), “Agorà Jazz Festival” (Inside Quartet), “Non solo Jazz nights” (Pierpaolo Bisogno e Sandro Deidda), “Saint Louis Summer Fest alla Casa del Jazz” (Rosario Giuliani), “International Jazz Day” (Rosario Giuliani), “Festival dell'Erranza” (Fabrizio Bosso), “Rock & Roll Circus” (Lello Panico), “Elettrika Roma Guitar Festival” (Ciro Manna ft. Patrix Duenas), rassegna “Luglio in jazz” opening for Hiromi Uehara with the Ciro Manna Band).
In 2015 he moves in Rome to study at the prestigious Saint Louis Music College, pursuing the studies of the electric bass with Gianfranco Gullotto. He fast becomes an affirmed musician in the jazz scene of Rome and starts collaborating with names like Roberto Gatto, Marco Sfogli, James Senese, Town Street, Michele Papadia, Dario Zeno, Massimo D’Ambra, Mariano Barba, Daniele Chiantese, Angelo Abate, etc… and others on the international scene: Mike Stern, Robben Ford, Paul Gilbert, Scott Henderson.
He also toured regularly in Europe with the rock/blues guitar player Paul Warren (Tina Turner, Joe Cocker e Rod Stewart). The years playing on small and big stages, from the duo to the orchestra allowed him to create a personal taste that ranges from jazz to pop, rock and funk. In 2017 finally he presents at “Auditorium Parco della Musica” “The Cristian Capasso Project” during the Festival “Jamming”. Later on he will present this project in many Italian cities. He is also an electric bass teacher and is working on his first debut album.

"Markbass, an exclusive style!"—says Cristian—"An amplifier with a full-bodied and powerful sound that guaranteed an audio without comparison. Definitely one of a kind, excellent combination of technology, sound and versatility." 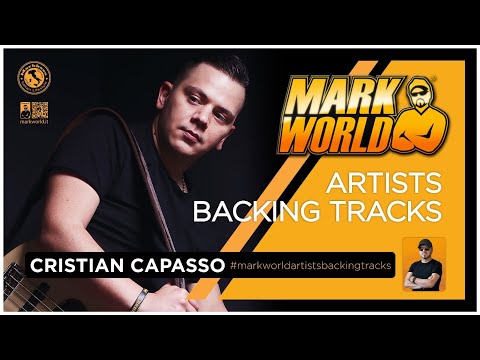