Dave Marotta was born into a musical family in Monterey, California. His father was a musician and owned the premiere music store on the Central Coast. From the age of 5, Dave played classical guitar and studied with the many fine musicians that frequented his dad's music store. At age 12 he attended the Monterey Pop Festival and was drawn to the bass playing of Noel Redding from Jimi Hendrix's band. Shortly thereafter, Dave picked up a bass from his dad's store, and has been a bass player ever since.

Upon completing two years of music studies at Monterey Peninsula College, Dave moved to Los Angeles and became a fixture in the LA studio scene, performing on records, movies, jingles and television productions, and touring and recording with artists such as Colbie Caillat, the Mark-Almond Band, Burt Bacharach, Gino Vannelli, Phil Collins, Carl Verheyen, Manhattan Transfer, Bruce Hornsby, David Benoit, and many others.

"For years I have been searching for a bass rig that can faithfully reproduce the sound of the many different basses I use, from a Musicman Bongo to a vintage Fender," says Dave. "I look for transparency, projection, fast response and headroom. With the SD800 amp and any of the many speaker cabinets available from Markbass, I have found a bass rig that meets this criteria and can cover any of the variety of musical situations that I work in while reproducing the tone of whatever bass I happen to be playing. I rarely need to use the EQ, but if needed, there are many options available to compensate for a difficult venue. Portability is also important and even the larger cabinets can be transported with ease due to the light weight."

"I recently used the Momark SD800 with the new Club 600F32 2x12 cab for small to midsize venues while on tour with Chad Wackerman and Carl Verheyen. This small rig put out an amazing amount of sound with a thick meaty low end and midrange while still having the definition I need to hear myself accurately. I absolutely love this rig." 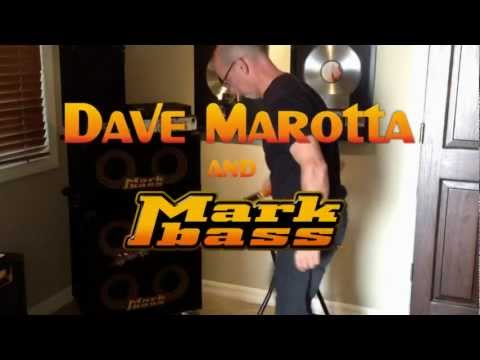